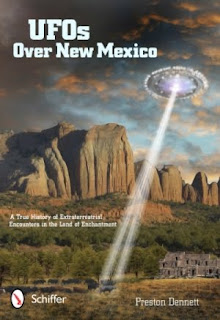 It began in New Mexico with the Rowsell crash -- or did it?!

Read about the Farmington UFO wave, the landing at Socorro, and shocking new revelations about the Rowsell crash! Learn about the fed's attempts to grapple with "a strange, unknown presence" hovering over top-secret atomic installations and military bases!

UFOs Over New Mexico: A True History of Extraterrestrial Encounters in the Land of Enchantment is chock full 'o eyewitness testimony and astounding photographs!
Posted by Thomas at 1:54 AM No comments: