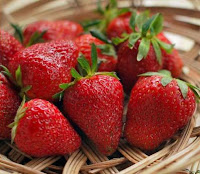 An amazing report from Medical Express:

Could strawberries as a snack or in your cereal, salads or smoothie help protect your brain from Alzheimer's? Maybe so, according to a new study from researchers at RUSH.

RUSH researchers found that a bioactive compound found in strawberries called pelargonidin may be associated with fewer neurofibrillary tau tangles in the brain. Tau tangles are one of the hallmarks of Alzheimer's disease, which is caused by abnormal changes with tau proteins that accumulate in the brain. The study was published in the Journal of Alzheimer's Disease on July 19.

"We suspect the anti-inflammatory properties of pelargonidin may decrease overall neuroinflammation, which may reduce cytokine production," said Dr. Julie Schneider, author of the study. Schneider is associate professor and neuropathologist in the Rush Alzheimer's Disease Center at Rush University Medical Center in Chicago.

Cytokines are proteins produced by cells and can regulate various inflammatory responses. Inflammation in the brain has been linked to Alzheimer's pathology such as plaques and tangles. The data suggests that pelargonidin may protect the aging brain from developing Alzheimer's disease pathology.

Among berries, strawberries are the most abundant source of pelargonidin. ...